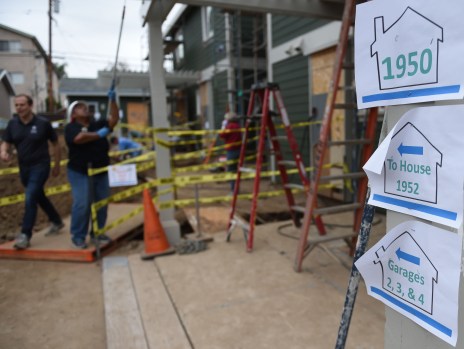 More than 30 volunteers gathered at a large construction site Saturday morning in Long Beach to dig trenches, paint walls, install flooring and electrical wire to help build four homes for four low-income families. The King Center challenged Habitat for Humanity, a national nonprofit Christian organization, to host 50 “Beloved Community” acts of kindness around the nation to honor the 50th anniversary of Martin Luther King Jr.’s assassination and the Fair Housing Act that was enacted just four days after his death. The nonprofit helps build and renovate houses that are funded by multiple sponsors and donors. According to Erin Rank, CEO for the organization’s Los Angeles chapter, Habitat L.A, the group is able to finance families at a much lower rate for those that may not qualify for a traditional loan. “We’re giving them a permanent solution out of poverty…” Rank said. “We’re proud to honor Dr. King’s legacy on the 50th anniversary of his passing because his dream is still very much alive through our work at Habitat L.A.”