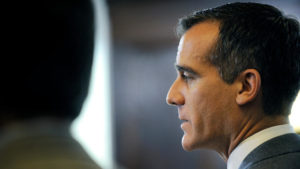 Los Angeles Mayor Eric Garcetti has been on the campaign trail almost every day lately, encouraging people to vote for Measure M, the countywide sales tax increase for transportation, and Measure HHH, the city’s bond to build housing for the homeless. He backs Measure RRR to change Department of Water and Power oversight, and he’s publicly thrown his support behind Measure CC, the Los Angeles Community College District bond measure to modernize its campuses. He’s even opined in favor of upholding the state’s plastic-bag ban, and he’s endorsed candidates in various local races. Yet Garcetti has refused to take a position publicly on one particular ballot measure that would affect the city directly — and could interfere with his promise to build 100,000 units of housing by 2021. That’s Measure JJJ, a labor-sponsored initiative that would impose some of the nation’s most demanding affordable-housing and wage mandates on privately funded development.